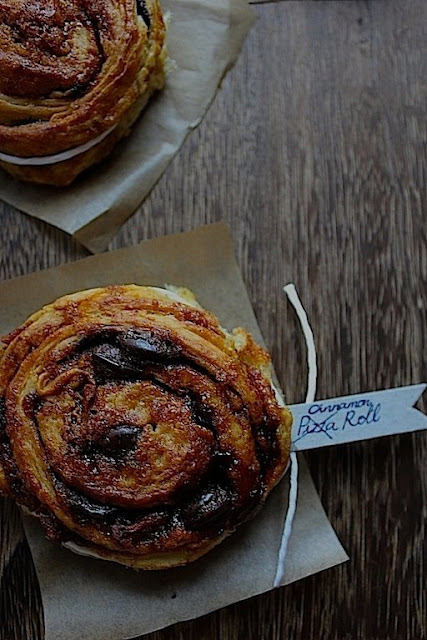 There are usually lots of things on my mind. Aside from being a female and as occupied as that already is, I tend to think even more. I think ahead and as far as that goes, i forget whats right in front. Hence, when someone told me that metabolism rate increases with the work of your brains (aka thoughts), I would have to politely scoff.

With that amount of brain-work, comfort food, dessert bingeing and random tubs of ice cream nights are mostly necessary rather than an inability to control (maybe not but its a good excuse). The only problem is when these cravings necessities affect the people around you.

Because, sweeties from all around the globe, when you're on your baking experiments, (and seeing as how delicious your works of art are) people eat. When people eat, they gain weight. When they gain weight, they blame people. Who else to blame but the person who thinks "hmm, chocolate with chocolate would taste great" (they are a match made in heaven by the way).

You might then question yourself, "but we eat the same goodies as well or even more". Good news for all of us, we may have gotten used to it! Yay! So, let's get down to business.

Recently, as much a craze I have for chocolate, I have been addicted to using Dark Palm Sugar or Gula Merah (translation for Red Sugar in Bahasa Indonesia). This sugar easily melts at body temperature. When baked, it turns into a nice browned crisp with a gooey inside and of course, the smell is just intoxicating. Surprisingly, unlike how it seems, it is  not as sweet as our usual white sugar.

1. In a bowl combine yeast, 1/2 teaspoon sugar and 1/4 cup water heated to 115 degrees F.  Stir and let sit until frothy and foamy, about 10 minutes.
2. To it, add remaining sugar, milk, light brown sugar, vanilla, egg, and egg yolk.  Beat until well combined.
3. Add the flour and salt and mix until the dough just begins to come together. Knead the dough for 4 minutes.
4. Add the butter and continue to knead for about 6 minutes. The dough will be wet and sticky.
5. Knead about additional 1/3 cup all-purpose flour into the dough. Don’t worry, the dough still might be a little sticky.
6. Set the dough to rest in a large greased bowl. Cover the bowl with a kitchen towel and allow to rise in a warm place for 1 1/2 to 2 hours, or until doubled in size.
7. While the dough rises, make the filling.


1. Combine everything except the chocolate chips and cream cheese, and heat it up on a skillet. Caramelise the apples until its gooey and set it aside.

2. When the dough has doubled in size, dump it from the bowl onto a heavily floured work surface. Gently knead the dough until it is no longer sticky, adding more flour as needed. About 3 Tablespoons of flour.
3. Work the dough for about 1 or 2 minutes.  Once it’s no longer sticky, place a kitchen towel over the dough and let rest for 5 minutes before you roll it out.
4. Using a floured rolling pin, roll the dough into a 10 x 10-inch square.
5. In a small bowl, mix the cream cheese until it’s smooth and spreadable. Spread the cream cheese evenly over the dough square.
6. Fold the square into thirds like you would fold a letter to fit into an envelope.  Take the open ends of the rectangle and fold into thirds again, to make a smaller dough square.
7. Invert the dough so that the seam is face down and, using the rolling pin, gently roll it into a 10 x 20-inch rectangle.  You may find that some cream cheese sneaks through. Be as gentle as possible with the dough, but continue to work it until you reach the size you need.
8. Turn the dough so that the short sides are parallel to you. You’re going to roll from the short sides of the dough.


9. Spread the top of the dough with butter.


10. Pour all of the filling onto the dough. Spread evenly, leaving a 1-inch boarder at one of the short edges of the dough so the roll can be properly sealed.  Lightly press the filling into the dough. Drop the choc chips as evenly as possible.
11. Using your hands, lift up the bottom edge of the dough and roll it forward into a tight cylinder.  Place dough cylinder seam side down on a cutting board.  Using a sharp, thin knife, trim off the uneven edges.
12. Cut cylinder into desired thickness. Evenly space the slices in a buttered metal baking dish. Cover pan with plastic wrap and set aside in a warm place to let rise for 2 hours.  You may also refrigerate rolls overnight.
13. Heat the oven to 375 degrees F. Uncover the rolls. If you refrigerated the rolls, let them sit at room temperature for 15 minutes before baking.  Bake until golden brown and a toothpick inserted in the center comes out clean, about 30 minutes.

Let's get to how it tastes. At first, I was surprised by the crisp hard edges of the dough. However, as i took a bite, the above picture tells it all. The dough was moist and in between each layer that the dough was divided, you can taste that slight tangy feeling of cream cheese. The pairing of  dark scented palm sugar with bitter sweet chocolate chunks is a no brainer. Lastly, cinnamon and soft apple bits that are already combined ahead of time makes perfect sense. The play of flavours in each bite comes together into a soft moist and comforting texture, with a brave and surprising kick of a taste, altogether, enveloped by cream cheese dough. 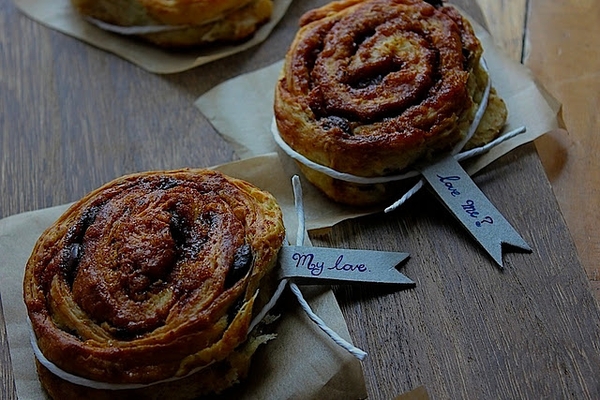