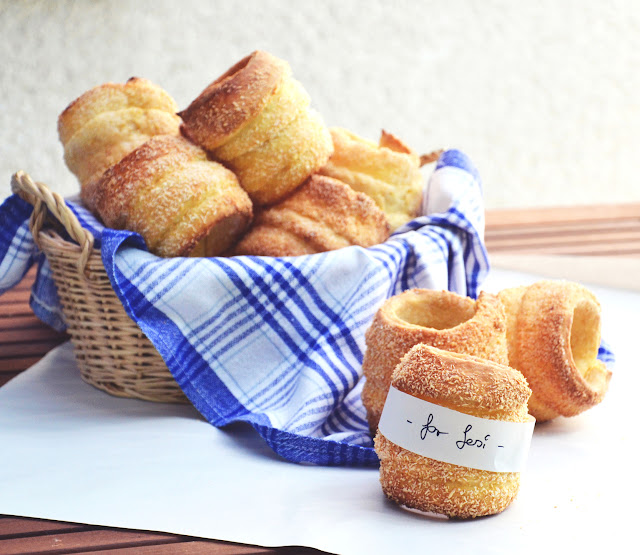 One of the things I look forward to, aside from coffee and new bedsheets, would be e-mails. One in particular is Mrs Ferguson's. I remember that picture of a Carrot Bundt Cake, I was charmed. Her unique photography style leaves you wanting more and turns you into a stalker. Her creativity keeps you at your toes, reminding you of human evolution. Please take a look at her Gotye Duck (I want this as a hairpin and possibly everything else around me).

Unfortunately, that's not all there is to Mrs F. Talent is but only a small part of her you're going to adore. With Mrs F, subjects range from Sherlock Holmes to the extinction of ants. Describing her as "Interesting" is an understatement. A ball of wit, no, a gem of inspiration.

Keeping her all to myself is anything but selfish. However, for the greater good of the world, I shall introduce her to you. Please do visit her blog here.

Hello there. My name is Diana and I run the blog Mrs Ferguson. I love everything crafty and sweet and funny. I live in Budapest, Hungary and I'm the proud owner of two adorable adopted animals, Theodore the ginger cat and Macesz the derpest dog ever. I started the blog because I was inspired by all those amazing things I saw on Pinterest and such, and wanted to be part of this family. I know I'm a very small fish - which I told Jesi when she asked me to do this guest post, but she wanted to do it anyway -, but I've had some amazing experiences already, and even if for nothing else, but getting to know this lovely, crazy duck-hating lady was well worth it.
Oh, and I AM the cheekiest monkey of all. 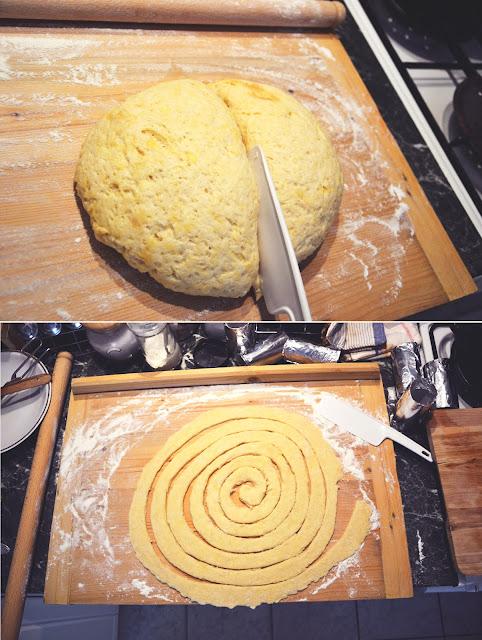 J: So, why "Mrs Ferguson"? Can't believe I've never asked this.
D: I'd like to think it's kind of a homage to Craig Ferguson and Stephen Fry rather than just plain stalking. :) I love their wit and intelligence. And I adore the fact that though highly sophisticated and smart, they still find fart jokes funny.The short answer would be: I have a creepy old man crush on Craig Ferguson. Plus Fluffy the Unicorn was already taken.

J: We all have got one of those (Hugh Laurie here). Speaking of which, if you end up a big shot hollywood photographer, what would you work on?
D: I don't know if anyone ever did something like this, but I would really like to see a campaign featuring celebrities without any enhancement. No make-up, no hair extensions, no photoshop, in a simple white tshirt and jeans. I love spontaneous photos and minimalistic style, too. And animals.
J: This is actually an awesome idea, but scary...
D: Can you imagine Lady Gaga in jeans, chucks and a white tank top with her natural hair in a ponytail? Such a perverted image.

J: (Laughs) Imaging Desperate Housewives crew and Sex and the city ladies.
J: How did you recognize your talent in crafting and photographing?
D: You're just too nice, people will be dissapointed if they come to check out my blog. :D I don't know, there hasn't really been a big milestone or anything. I've always loved photography, I used to waste a lot of rolls of film when I was little running around our garden taking pictures of snails on the concrete. Plus my paternal grandfather who died long before I was born was also a big photography aficionado so I inherited many photos and old cameras from him. Maybe not having a chance to actually know him made me interested in the things he liked. He was crafty, too. And I always loved the little craft projects in kindergarten and elementary.

J: What about baking?
D: For the baking... I guess loving to eat up all things sweet gave me a big push. :) But I think for me it started the other way around. First I got interested in food photography which led me to the preparing part. Plus the cooking channel.
J: Yes! The cooking channels, your other creepy crush for Jamie Oliver.
D: Come on! He's awesome! And those baby blue eyes..

J: (Laughs) I prefer green after all.. What about your humour and wit?
D: For the humour...I guess I was just born this way.:D I remember when I was about 12 or so I used the watch a taped show on VHS of a Hungarian late comedian, GÈza Hofi, almost every afternoon after school. He was intelligent, wise and piss-your-pants funny.
J: I was watching Mr. men everyday.. Do you ever get in trouble with that humour?
D: Hmm... I won't say trouble, but sometimes after I say something sarcastic and people don't get it I just end up looking like an idiot.

J: I feel your pain.. I feel you... sobs* It gets lonely when they don't get your jokes.. Whats your inspiration?
D: Everything. A photograph. A song. A good movie or a TV show. Nature. The Internet. A crack in the pavement. Anything.
J: Such an artist... I would love to see through your eyes just for one day... 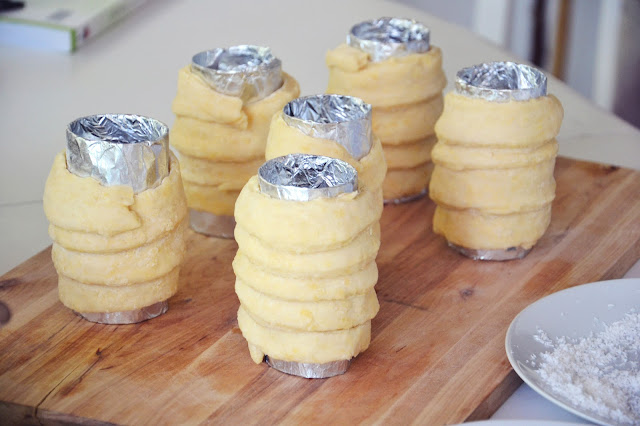 This pastry originates from Transylvania and it's very popular here in Hungary. You can get it at festivals, funfairs, at the beach, and even from carts on the street. It's usually made in an open fire, so it naturally won't be the same when made at home, it's still pretty tasty and I think it looks really cute.
750 g flour
2 eggs
100 g melted butter
200 ml milk
30 g yeast
100 g sugar
zest of a lemon
1 tbsp vanilla extract
pinch of salt

0. Collect toilet paper rolls. It might take some weeks. Cover them up in aluminium foil.
1. Dissolve the yeast in 100 ml warm milk (not hot) with a pinch of powdered sugar.


2. Combine all ingredients and knead the dough until it forms a ball that doesn't stick to the hand. Add more milk if dough doesn't come together. Cover it up and let it double in size about 1 to 2 hours.
3. When the dough rises, roll it out to about 0.5 cm thick. Try to keep dough in a round shape, then, cut it in a spiral manner.
4.Grease the aluminium rolls with some oil. Roll the dough strips along the outsides of the aluminium roll. Line the layers as closely as possible, even to overlap. Roll the dough layers in the middle of the aluminium rolls, leaving the ends of the roll clean. This will ease sliding the pastry off when they're done.
5. Coat the little chimneys with beaten egg using a pastry brush and roll them in preferred topping.


6. Bake at 200C for 20 minutes or until golden brown. Cover with a cloth so they won't dry out. As most yeast dough pastries, they are best eaten fresh.
If you ever visit Hungary, don't forget to try it. You'll thank me. 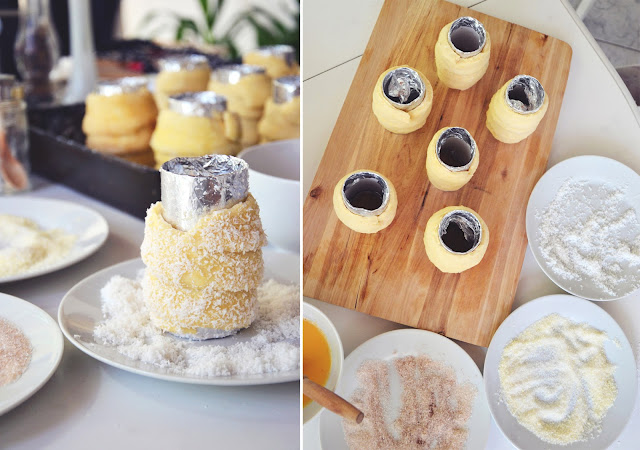 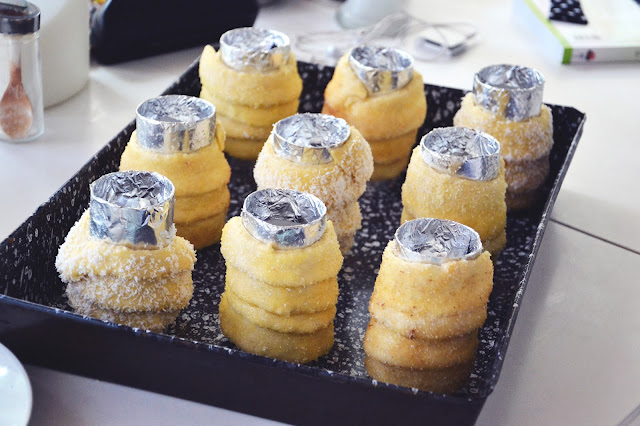 I wanna thank Jesi for giving me this opportunity and for the constant ego-boosts and messages. Everyday I check my e-mail account more times than it would be considered healthy just to see if she wrote me. Finding someone who is from the opposite side of the world, yet more like me than most of my peers here was an amazing experience and for that I would cherish the Internet forever. Plus she's sent me candies. 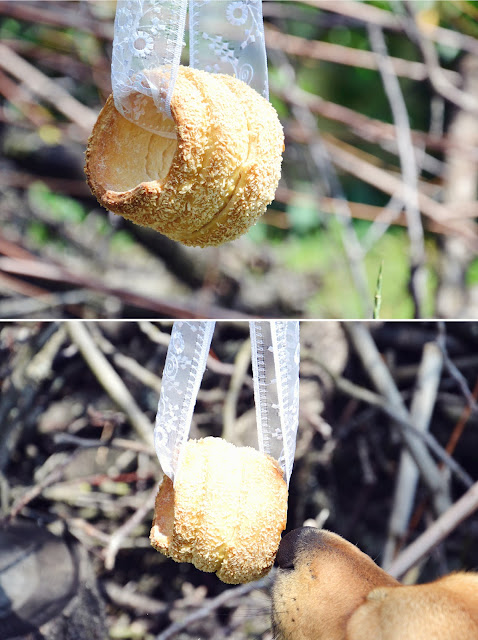 Diana mentioned that this pastry is like a combination of donut and pastry. Can you imagine that? Also, let's not forget to wish our Mrs F here a Happy Birthday!
To Diana: You are awesome, enough said! Happy Birthday! 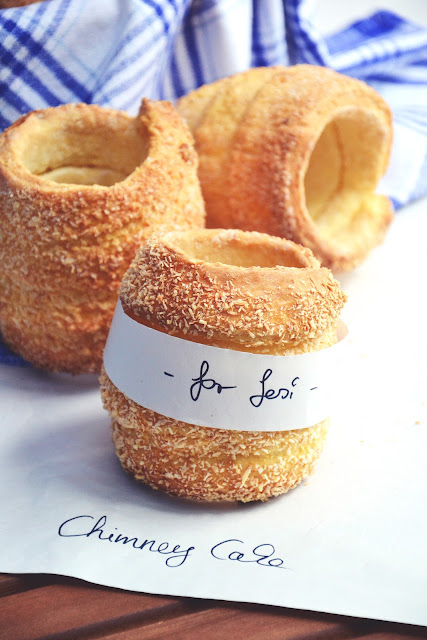